The eighth document for our Hodgetts family in Australia was the baptism entry of Mary Maria Hodgetts, the second daughter of Thomas and Harriet Hodgetts.

I then checked for references in the online index of the Registrar of Births Deaths and Marriages in Sydney at https://bdm.nsw.gov.au/

There was only one, the baptism register of the Rev Richard Johnson. Using this reference I was able to search for this entry in the Archives Authority of New South Wales (now State Records) Genealogical Kit (1988) for baptisms 1788-1855.

The early colonial baptism, marriage, and burial records of some 164 volumes cover the time before civil registration in New South Wales. This includes Victoria and Queensland which was part of New South Wales at that time. These are held as Government records by the Registrar of Births Deaths and Marriages for New South Wales in Sydney.

Many of these records were microfilmed and released to the public in the Archives Authority of New South Wales Genealogical Kit in 1988. Of the 164 volumes copied, only 123 volumes were released in the kit covering the time frame 1788-1855. Volumes 124-164 were not included in the kit.

This was because some of the records contained in the volumes were after 1855 so fell outside the parameters of the historical project and were subject to state privacy laws. Other volumes were not included because they were so fragile and the handling of those volumes would have destroyed them.

Returning to our Hodgetts research, I found Volume 4 was in the above-mentioned records and I was able to view a microfilm copy of the original record on AO Reel 5002. This was Rev Richard Johnson’s original baptism register. I also made a page by page search of Vol 1 1795 for the entry of the chronological list the Rev Johnson sent to the Governor’s Office, as I believed there was every indication this record had been created and most likely survived. I found the entry for this baptism on Reel 5001 – Vol 1 1795 entry 465. Somehow it had escaped the on-line index at the website for the Registrar of Births, Deaths, and Marriages for NSW.

Although you can view these records at your library you cannot make a printout as it is a condition of use of these records and is stated at the beginning of each film. The copyright belongs to the Registrar of Births Deaths and Marriages.  I was able to make transcriptions and add appropriate notes. 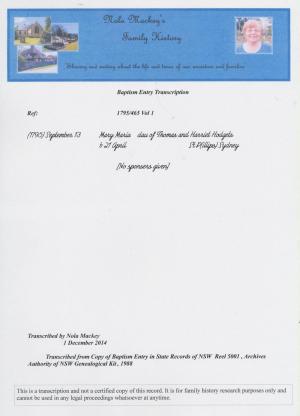 You will note this birth took place a few days after the burial of their eldest daughter Mary. This would give a reason this daughter was also called Mary. The baptism took place in Sydney in September and was recorded as taking place in the parish of St Phillip’s Sydney, so we know that Thomas and Harriet were still residing in Sydney. We also know by this date that the Rev Richard Johnson had completed his church, so this baptism took place in the church.

From earlier research we know that Thomas Hodgetts was sentenced in March 1788 to seven years transportation and he came on the Second Fleet, arriving in June 1790. So doing the calculations, by March 1795 Thomas had served his sentence and was, at last, a free man. In theory at least, as it would have taken some time for the Governor’s Office to confirm his status.

How did this new status change his life?

In a later blog, I will show you how you can take these documents and use them as a timeline to research the mass of colonial documents to build a possible  life story for our ancestors. 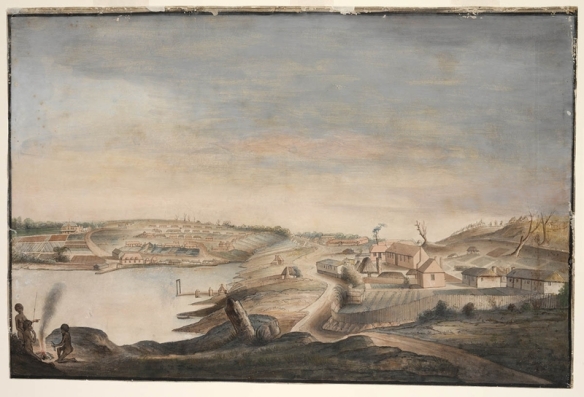